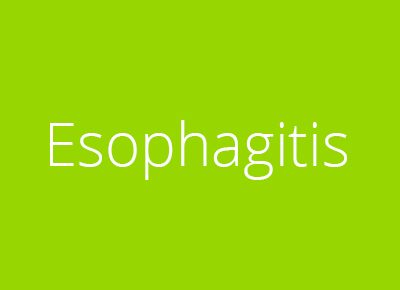 What is it?
Esophagitis is inflammation noted in the esophagus and can be caused by various conditions.
– Reflux
– Drug-induced
– Eosinophilic (allergic)
– Infectious (CMV/HIV/Candida)

What are the symptoms?
The symptoms of esophagitis include difficulty swallowing, painful swallowing, chest pain that occurs with eating, burning sensation in the chest, food becoming stuck in the esophagus (food impaction), heartburn, acid regurgitation.

How is it diagnosed?
Esophagitis is typically diagnosed via endoscopy, as it may be visualized and biopsied to provide exact etiology of the inflammation in the esophagus.

Are there any complications?
It is possible that if reflux symptoms worsen, they can cause narrowing of the esophagus. In this case, your gastroenterologist would consider an esophageal dilatation to open up the esophagus.