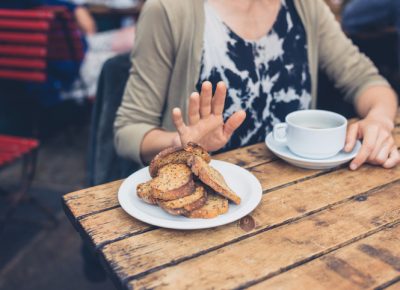 Celiac disease is both a digestive disease and an immune disorder. If you have celiac disease and you eat a food that contains gluten – a protein found in certain grains – the antibodies created by the condition attack when the gluten reaches your small intestine. The response eventually damages the lining of the small intestine which can lead to malabsorption of important nutrients, fatigue, bloating, anemia and diarrhea. Malabsorption of nutrients can cause malnutrition because you are not getting the proper nutrients you need. Malnutrition can cause vomiting, weight loss and other health issues.

If you have celiac and it goes undiagnosed continuing to eat foods that contain gluten cay cause other health problems including osteoporosis, infertility, and the onset of other autoimmune diseases, like diabetes type 1, thyroid disease and Sjogren’s.

This is important to know since three million Americans across all races, ages, genders and ethnicities suffer from celiac disease. Eighty-three percent of them are undiagnosed or misdiagnosed. And it will take an average of 6-10 years for most Americans to get a correct diagnosis.

Celiac disease is hereditary. There are more than three hundred known symptoms of celiac disease. Symptoms can vary among people. Due to the wide variety of symptoms that may present themselves, it can sometimes be difficult to diagnose celiac disease.

One person might have diarrhea and abdominal pain, while another person has irritability or depression. Some patients develop symptoms of celiac disease early in life, while others do not experience symptoms until far into adulthood. Then there are people with the disease who have no signs or symptoms at all.

The most common symptoms of celiac disease include:

There are also what is known as asymptomatic or silent celiac disease, which is when someone with celiac disease has no outward symptoms. All these differences can make a celiac disease diagnosis extremely difficult to make.

Blood tests are the first step in diagnosis for celiac disease. These tests will measure your body’s response to gluten. In addition to the blood tests, your doctor might order further testing to confirm the diagnosis.

The only way to manage the disease is to completely avoid all foods that have even the slightest trace of gluten. Many people with celiac only know about the “regular” foods that have gluten, such as wheat. But there are a lot more foods that contain gluten which must also be avoided.

How to Eat a Non-Gluten Diet

Many foods have gluten in them. The best way to enjoy food if you have this disease is to eat the non-processed foods you love that are beneficial for you. Some might include:

The medical providers at Ocean Family Gastroenterology are experts at diagnosing, treating and supporting patients with celiac disease and other digestive disease disorders. If you have digestive health concerns call us for a consultation at 732-281-1590 or online HERE.