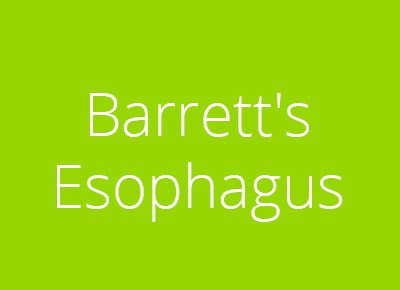 What are the symptoms?
No specific symptoms, the atypical cells noted in the esophagus does not cause symptoms. However, it is the long standing acid reflux symptoms that patients with BE experience.

How is it diagnosed?
BE is diagnosed via biopsy during an upper endoscopy (EGD)/ This is a procedure where your astroenterologist will put you under sedation and examine the lining of the esophagus with a thin, flexible scope called an endoscope. They will then take biopsies to be looked at under a microscope, to confirm the diagnosis of BE.

How is it treated?
Treatment includes starting prescription medication called proton pump inhibitor (PPI) which decreases the amount of stomach acid that comes up and irritates the lining of the esophagus causing heartburn symptoms. Your gastroenterologist will perform routine endoscopies with biopsy to monitor the progression of the condition into precancerous or cancerous cells. If pre-cancerous cells are noted, they can be removed via radio-frequency ablation during your endoscopic procedure. To learn more about this condition, consult with your gastroenterologist about the various treatment options.

Are there any complications?
If this condition goes untreated, there is a possibility that the atypical cells in the esophagus can turn into cancerous cells and cause esophageal cancer. It is important to consult with your gastroenterologist about this condition and the prevention measures.