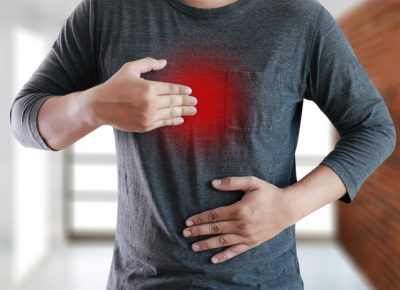 Acid reflux is a common condition, affecting approximately 20% of the population on a regular basis. During the Holiday season, it might affect even more people due to changes in routine and unusual eating habits. It is best to learn what causes acid reflux and try to prevent it as it can cause a number of uncomfortable symptoms in varying degrees of severity.

In acid reflux, the lower esophagus sphincter fails to close completely or opens too often. The acid produced by the stomach can move up the esophagus. This produces burning chest pain known as heartburn or acid reflux. Acid reflux can present with heartburn, regurgitation, bloating, nausea or vomiting, burping, and recurring hiccups. Fortunately, acid reflux can often be prevented and treated successfully.

At the bottom of the esophagus, a ring of muscles, known as the lower esophageal sphincter (LES), opens to allow food into the stomach. Usually, the LES closes tightly after the food has entered, which prevents the stomach’s contents and acids from backing up into the esophagus. If you have acid reflux, however, it means the ring does not close tightly enough or it may open too frequently, allowing stomach acids and other digestive juices to travel back into the esophagus. This irritates and damages the lining of the esophagus. Symptoms of acid reflux can vary from person to person, but often include:

If you experience acid reflux symptoms more than twice a week, you may be diagnosed with a condition called Gastroesophageal Reflux Disease (GERD). GERD is a chronic type of acid reflux. If left untreated, GERD can lead to serious medical complications, such as esophagitis (inflammation of the esophagus), esophageal stricture (narrowing of the esophagus), respiratory problems, and Barrett’s esophagus.

Older adults are at greater risk because the muscles in the esophagus can weaken with age. There are several other factors that can cause acid reflux including:

Being overweight or obese, particularly if excess weight is carried around the stomach, can cause acid reflux. Weight can increase pressure on the abdomen, which can cause acid to back up into the esophagus.

There is increased pressure on the abdomen during pregnancy, and some hormones that are produced can relax the LES and the muscles in the esophagus, which can cause food to move more slowly and acid to back up into the esophagus.

A hiatal hernia is when a small part of the stomach protrudes through an opening in the diaphragm (the muscle inside of the chest wall). It does not always cause symptoms but can increase the risk of developing GERD and symptoms like heartburn, chest pain, difficulty swallowing and belching.

Poor eating habits and some foods can worsen reflux symptoms, such as eating too much, or lying down just after eating, which can cause food to back up from the stomach into the esophagus. Some foods can irritate the digestive system and cause the stomach to produce excessive acid, which can also trigger symptoms of acid reflux. These include:

Maintaining a healthy weight can help to reduce acid reflux, but some exercises (such as running) or eating right before or after a workout can trigger acid reflux. High impact exercises can also reduce blood flow to the gastrointestinal area and cause increased amounts of gastric fluids, which can cause irritation. Swallowing air during exercise can also relax the LES, allowing acid into the esophagus.

Diagnosis And Treatment of Acid Reflux

Acid reflux or GERD can be diagnosed by reviewing your medical history and symptoms. Your doctor may recommend a test such as an upper GI endoscopy, barium swallow, esophageal manometry, pH impedance test or the Bravo™ capsule test. Depending on the severity of symptoms, treatment might include lifestyle changes, medication or a combination of treatments to bring relief. Surgery could be an option In severe cases where other treatments are unsuccessful.

Gastroenterology Care Near You

If you are experiencing symptoms such as acid reflux, contact Ocean Family Gastroenterology today. Our advanced team is equipped with the knowledge and the technology to diagnose and treat your digestive disorder. To find out more about our services or to schedule an appointment, contact us at 732-281-1590, or use our online appointment request form.